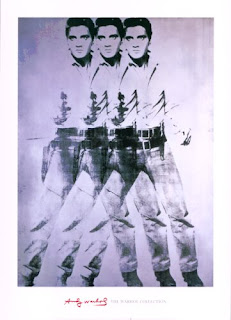 /ˌhæɡiˈɒɡrəfi/) is the study of saints.
From the Greek (h)ağios (ἅγιος, "holy" or "saint") and graphēin (γράφειν, "to write"), it refers literally to writings on the subject of such holy people, and specifically to the biographies of saints and ecclesiastical leaders. The term hagiology, the study of hagiography, is also current in English, though less common. This latter term, in fact, follows original Greek practice, where ἁγιογραφία refers to visual images of the saints, while their written lives (βίοι or vitæ) or the study thereof are known as ἁγιολογία.

A few nights ago I was dreaming of American saints. Michael Jackson, Whitney Houston, Marilyn Monroe, and other faces were interacting in a surreal landscape of white infinity stages and cyberspace. Some of the saints had full bodies, some were just heads, others were voices. And they were all talking with each other and my friends. Some of the headless bodies looked famous but I couldn't recognize them without their face. They had the body archetypes of fame: women with astonishing curves and chiseled sun-tanned men.  James Dean might have been there in torso form, and Elizabeth Taylor's purple eyes floated in outer space. The decapitated bodies strutted around and moved like celebrities.

I am dancing with a headless celebrity. Torso-to-torso. I want to ask for her who she was.

Who are you?!? The suspense is killing me!!

But I don't ask. I am afraid she will offended that I don't recognize her. We continue dancing and I pretend to be starstruck.

Is that Judy Garland's voice?

Aren't Liz's eyes so pretty and bright against the white?

When I woke up my mind was exhausted. I felt like I had been watching a 9-hr Warhol movie with no plot, just stagnant glamour and artifice.


I sat down to meditate and entire stories and sections of conversation started popping up.  Some of the dialogue was quite good but I've meditated long enough to know that I can't be drawn in by clever dialogue in my head or I would never sit on a cushion again. I pushed the voices into the darkness for an hour. I wondered if they would come back afterward but couldn't be concerned about appearing/disappearing voices and images.


We were all watching Whitney Houston's funeral and commenting on it via Facebook. When I said something poignant, other people 'liked' it. Some times our discussion would overlap and I would 'liking' someone's commenting while arguing with another.


I imagined Whitney arriving at a party, shaken and paranoid. Is it the drugs or is someone really following her? The bouncer is excited to see her but Whitney just wants to get inside and away from whomever or whatever is coming up on the elevator.


When paranoid Whitney gets inside, everyone is dressed like 1980s Whitney, with pink and fluorescent lace tied around frizzy orange hair. This doesn't go over well with her. She freaks out. But she doesn't run. She stays. We sing her songs. She has no place else to go except the echo chamber.


These chaotic images and thoughts flooded my mind the next day. What does all of it mean? Is this a new play?


I'll sit with the images, the mirage hagiography. Maybe it will grow organically or perhaps it will disappear back into thin air the more I scrutinize it. New ideas are so tenuous and delicate. Better to let them grown in my dreams.
at April 19, 2012

- visiting friend in the deep South. I was asked if I wanted to borrow someone's car so I could cruise around town? Uh, hell no, no, n...