Outside my father's window is a dusty red patio and a row of bushes entangled in the backyard fence. The fragrant plants attract an array of butterflies and birds. Today I saw a blue bird skipping underneath the branches as zebra butterflies levitated over the stench of fallen berries and dead leaves.

For the past week I have been entranced by the activities outside the window. My father's hospital bed is sidled up alongside the glass, but he stares straight ahead at the TV. I'm surprised no one else seems to notice the butterflies. When I point to them, my father just shakes his head 'no' and continues staring at the TV.  When I mentioned them to my mom she sought a botanical explanation.

"Well...they're attracted to the berries."

It seems unreal. The butterflies look like they're on strings dangled from above. I guess it's seems dreamlike because the serene silence. The insects make no noise and don't seem to be going anywhere. They look like floating flowers or animated pieces of paper. I wanted to take out my camera but the moment was too fragile to sustain documentation and social media reposting. Instead I just gathered the view with my mind.

The butterflies feel gentle and vulnerable. Their ecosystem consists of shade, sweet fruit, and mud drenched in berry juice and pulp. I want to go into their space but I worry that they'll scatter. For now I just stare out of my father's window.
at October 24, 2012 No comments: 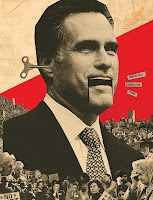 This year it's not uncommon to hear my mom arguing with someone on the phone. These are perfect strangers who are calling up. You see, my mom lives in Florida which means she gets a call from either Obama or Romney campaign every time she blinks. I have been in the house when the campaign callers ring and she clearly states she's voting for Obama.

Her reasons for voting for Obama are simple:

1. she's retired and lives on a fixed income and a variety of mutual funds
2. Dow Jones stock market has doubled in the last 4 years, which means more money for her.
3. she's also gotten a tax break from Obama, which means more money.
4. Obamacare has closed the donut hole for prescription drugs. She used to spend over $10,000 just on prescription drugs. That has gone down by 25% since Obamacare was passed
5. the donut holes will be completely closed by 2014 and her costs will probably go down 30-40%
6. And personally likes people who tell the truth and have some integrity.
7. She sees Obama as having integrity and living up to his claims to a) improve the economy b) improve health care c) improve our image abroad. And although things haven't been perfect, she has physical and numerical proof (i.e. more money) of the change.

Obama people take calls, solicit information and then leave you alone. And I should know: I was an Obama campaign staffer in 2008 and had to train people on how to make phone bank calls.

The Romney people apparently are operating on a different script. When they call my mom and get the information that she's voting for Obama this -inevitably- starts an argument. They hit her with a bunch of statements which aren't true and have been completely disproven but which Romney campaign continues to put forward. This speaks to their lack of integrity. When confronted with facts, the person over the phone denies them but -unable to break from the script- just reiterates the same talking point again. This pattern extends straight up to the top with their candidate.

When the Romney volunteer begins warning my mom that she's going to have Medicare cut by Obama -which is also not true- she tells them how much money she's saving. These aren't her opinions. These are facts of more money in the last 2 years. The Romney volunteer REFUSES to believe this. Just flat out refuses to hear it.

Here are some of the things said:

"You won't be able to get a mammogram when you turn 75!" the Romney volunteer screamed.

This isn't true but she screeches this continually over the phone. I wonder how many uninformed voters in Florida start to believe this just because of the volume and intensity of the lie.

"You're being BRAINWASHED by MSNBC!!" the Romney volunteer said.

She said this to facts my mom reported about her own medical costs.

"He's flip flopped because he hasn't done all of things he promised," the Romney volunteer said.

This isn't flip flopping. It's an incomplete agenda. The Romney campaign counters with flip flopping because that is the very label that seek to shed.

The Romney volunteer may switch to the economy and warns of socialism. My mom lets them know that she has more money than ever because her income relies on the most capitalistic system in America: the stock market. And the market is booming for smart investors.

The argument circles around the same 4 or 5 talking points the Romney volunteer has been given. They can't speak personally to these claims because they aren't based in any objective reality. The volunteers are often old women warning of danger and fear. My mom speaks personally to her experience as well as from facts she reads in non-partisan papers.

What is clear is that the two campaigns embody the candidate. While Obama campaign may remain subdued and perhaps too polite, they are factual, quick on the point, and have some basic decorum of respect. The Romney volunteers often argue with her, make claims which have been fact checked as false, ignore actual numbers, and then abruptly hang up (only to call again later).

If we are obsessed with 'winning' as the key indicator of this election then Romney stands a chance. I used to debate and I know the aspects of 'winning.' There were student debaters who would say anything and completely lie to win a round. I often had problems with these debaters because I had to balance my own arguments while correcting their arguments, without making myself seem petty. It's a tough task but it's one that Obama has to do in the next debate. If my mom can do it, Mr. President then so can you. So do it!!
at October 08, 2012 No comments:

October 2nd is the official launch of Vote It Forward Festival (ViFF)  an online film festival seeking short viral videos to encourage people to get out and vote. And we're handing out awards for the best virals.  These videos can be vblogs, editorial commentary, music-themed, satirical, spoken word, or testimonial. Just as long as they bring to light the importance of exercising our Democratic voice. We want to hear from you!

ViFF will be awarding $500 awards and a featured spot on our site to at least 10 viral videos throughout the month of October. At the start of November, ViFF will award one video with a $1,000 grand prize.

So spread the word to friends, family, and associates who might be interested and tell them to check us out at Vote It Forward Festival (ViFF)

-VIFF will no longer be accepting submissions after the deadline of November 3, 2012! (Save The Date.)
-Your original vblogs, skits, testimonials, spoken word performances or animated shorts must be between 1-3 minutes in length. However, if it’s compelling, captivating and any other adjective that starts with “c”, then we’ll take it. As much as we want you to be creative, please stick to the topic of voting.
Improve Your Chances For Winning!-We encourage you to check out some of the “On Our Wavelength” videos posted under the “watch” categories to get a sense of what’s been done.
-Additionally, by being a part of the VIFF community and engaging viewers to interact with your work also improves your chances. So here are a few simple things you can do to improve your chances of winning ‘Top 10′ and $500, as well as the grand prize of $1,000.
Engage:
1. Like us on Facebook
2. Follow us on Twitter
3. Subscribe to VIFF YouTube channel
4. Watch and comment on other VIFF submissions
Submitting video:
1. go to ViFF submission page
2. fill out embedded form
3. Tell your friends to check out your stuff on our channel, ‘like’ and comment on it as well!
4. …And if you win we’ll ‘crown you’ with the VIFF laurel reef!

Given the large amount of funny, insightful, and informative content on the internet, more and more young voters rely on viral videos to receive their news and make decisions. All it takes is a camera phone, flip cam, or laptop to spread your message to millions. The time is now!

As early voting begins and the presidential debate season is upon us, we encourage you to take an active part. Let your voice be heard.

The Art of Argument and Persuasion was one of the freakiest classes at Northwestern. Actual relevant info students could take out of the cla...