A lot of people have been saying that the 'Rogue WH Snr Advisor' tweets and other Rogue POTUS handles from inside the administration are 'fake twitter' or joke accounts. Let's look at the record. In the last month this account has accurately predicted ahead of the mainstream media 1) the Flynn freak out in the White House and their fears 2) Flynn eventually resignation almost a week before it happened 3) Trump's obsession with 306 electoral votes BEFORE his insane press conference on Thursday in which he cited 306 as if it was some sort of magic code 4) the Executive Order draft to use the National Guard to deport immigrants that the White House vehemently denied before admitting that it was a legit draft 5) the Florida rallies Trump wanted to distract the media that are happening this weekend 6) Labor nominee Puzder troubles and his intention to withdraw his nomination, which also happened this week. 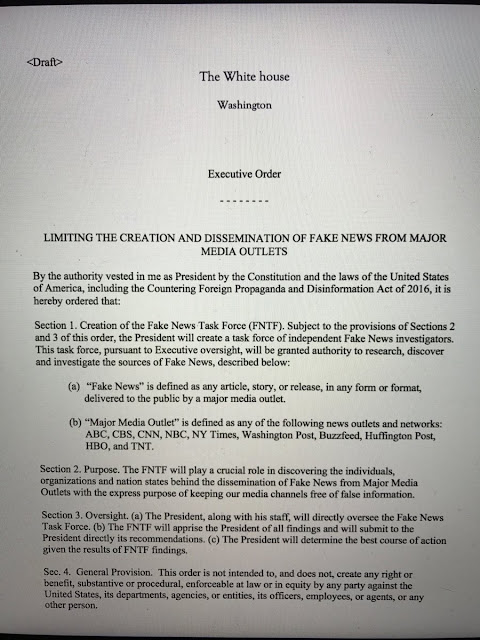 Well..now there is a draft of an Executive Order to form a 'Fake News Task Force.' I suspect that -even if this is real- this is a draft that will never get released (like the National Guard EO) b/c it is too insane, even for the Trump administration. But I think this -along with all of his other actions- indicates that Trump really thinks the presidency is like a king. He really doesn't understand how 3 co-equal branches of government work in our country, or how the media operates as an essential fourth estate in a democracy to verify information. And he is dangerous to all ppl (yes, you too Republicans) because he's woefully ignorant, emotionally imbalanced, mentally unfit for public office, and was actively colluding with a hostile, mass-murdering foreign dictator to undermine our government. Trump is persistent in his attempts to undermine our elections, free speech, freedom of the press, and our Constitution. It's only been one month. It will not get better. Yeah...Make America Great Again. #MAGA
at February 18, 2017

Email ThisBlogThis!Share to TwitterShare to FacebookShare to Pinterest
Labels: Trump

- visiting friend in the deep South. I was asked if I wanted to borrow someone's car so I could cruise around town? Uh, hell no, no, n...